To complete a bachelor’s degree in one of the above fields, it is very helpful to earn credit for a calculus course in high school.  Not surprisingly, the severe underrepresentation of black students shows up in Florida’s AP Calculus classrooms.  Among Florida’s 2016-17 AP Calculus AB students, only 6.9% were black.  In AP Calculus BC, only 3.9% were black.

However, these statewide numbers obscure a tremendous amount of variation among Florida’s school districts.  For example, Sarasota County is approximately tied with Orange County for second place in the state for the rate at which middle school students of all races take Algebra 1 and pass the EOC.  In each of these two counties, about 48% of students pass take and pass the Algebra 1 EOC while in middle school.  However, in Sarasota County only 19.5% of black students do so.

A ranking of the 38 Florida school districts that have 100 or more black students in each grade on the basis of the success of black students in middle school Algebra 1 is shown below, side-by-side with a corresponding ranking for students of all races.  The present analysis calculates the number of 7th graders in a district who passed the Algebra 1 EOC as a percentage of the total number of 7th graders in the district, and does the same for 8th graders. The districts are then ranked according to the sum of the 7th grade and 8th grade percentages. The sum provides an estimate of the percentage of middle school students who pass the Algebra 1 EOC before moving on to high school.  The plot on the right accounts for students of all races, and the plot on the left includes only black students.  The data used for the analysis comes from the Florida Department of Education’s EdStats system.

Collier County, which is far ahead of second place Sarasota and Orange when students of all races are taken into account, has an even larger lead when only black students are counted.

There are other notable cases.  St. Johns County – Florida’s only truly affluent district – is ranked 10th when students of all races are included.  But for black students, it is ranked 32nd – six places from the bottom.

Gadsden County, the economically struggling north Florida county with a largely black student population, is ranked 38th (and last) when students of all races are taken into account but considerably higher – 20th – for black students.

Alachua County, the home of the University of Florida, had 718 black 7th graders this year but had fewer than 10 black 7th graders taking Algebra 1 (EdStats doesn’t show a number for any activity that has fewer than 10 students for privacy reasons).  Alachua ranks 34th for middle school Algebra 1 success by black students, even though it ranks 7th when all students are taken into account. 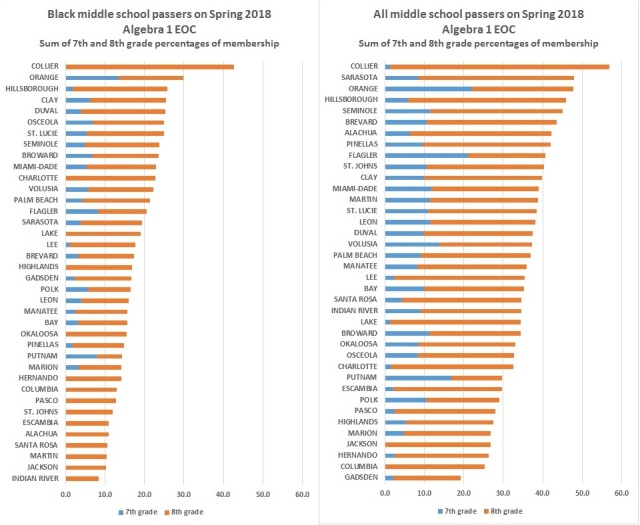